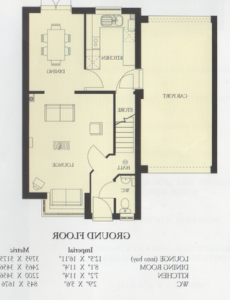 Original Plans from Barratt Homes (who built the house). Plan reversed to show our layout – these houses are built as semi-detached, each house mirroring the neighbour.

When I decided to have an extension done, rather than just build a conservatory, I started developing my own design ideas before speaking with an architect. I like to think I have a good idea of how to best use my space – I live in it every day and know what I like! However, the design process did go around the houses a little.

The problem with my house is that we have a main living room / dining area downstairs which connects the front of the house and stairs to the rear. So the living room is a thorough fare with hallway door one end and arch to dining room the other. The kitchen comes off the dining area and is very small. Ignore the furniture in the Barratt Homes plans above – these rooms are all much smaller than shown, you cannot put a sofa in front of the arch and a chair in on the right without blocking the room off from the rest of the house!

Before having children this worked OK, however, now the living room is always a busy area and there is nowhere to get peace and quiet downstairs. The kitchen is too small to cook and socialise in at the same time so the kids get upset sometimes when cooking as they are left on their own.

So the ideal situation was to have a larger kitchen with dining area and a larger living room which could be closed off from the rest of the house. Fortunately when I bought my house I set 2 strict criteria:

As mentioned, we were thinking of building a conservatory, however, after looking at some conservatories which friends owned we came to 3 conclusions;

So extension was needed. But how? 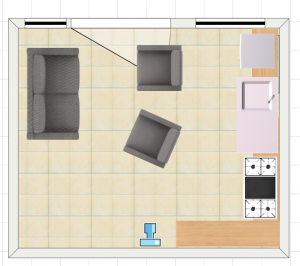 The first idea was to build a kitchen / lounge extension at the rear. The idea was a family living space. I created some designs using MyDeco (I might blog that process separately as it is both an excellent tool and a little complex for this post).

The idea was to have the kitchen along the righthand wall with a large French door (or bi-folding door) and sofa / arm chairs to the left. The room would be 5 m wide and about 4 m deep.

However, after playing with some layouts we soon realised there were several problems with this:

So we scrapped this idea completely.

Again, MyDeco was used to create a layout of the downstairs of the house.

The rear room (the extension) would be living room only, with 2 sofas and television, with space for some furniture. In the design (to the left) I used sofas which were too large, so the room looks smaller than it actually is.

The new kitchen would be a one wall kitchen (I collected a lot of single wall extension ideas which I logged on Pinterest – pinterest.com/kitchen-ideas/. The first idea was to have to small sofa in the kitchen in the bay window (we bought it for that window, it is 150cm wide and fits perfectly). However, after developing some design plans with Homebase, Tesco Kitchens and Bringey Kitchens, we realised that one wall was not enough.

The next idea was to have a free-standing unit under the front bay window, but this would still leave the main wall with the fridge-freezer. oven and sink, and very little work top. 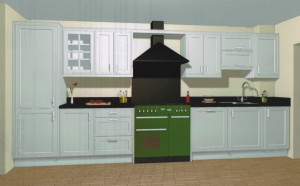 As you can see, a single wall kitchen can look great – but little prep area. We did consider having a under-counter fridge and keeping a chest freezer in the utility (old kitchen) but this did not seem sensible in the end.

So we scrapped this idea and decided to extend the kitchen into the bay window, which means raising the height of the bay window to allow a full height fitted unit with sink. We do not have a design for this as out builder will plan this with us – this works out a lot cheaper, cutting out the middle men and also getting a nice trade discount on fittings.

So, we are finally clear on what we want. The only change to the above design I created on MyDeco was to add a wall into the utility area and create a new hallway in the centre of the house – the backdoor will become our main entrance. We will also square off the (new) kitchen door so that the door does not knock the table / chairs when opened. 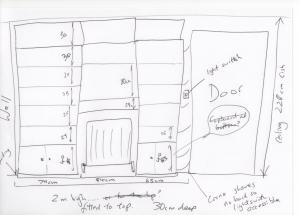 The old dining area will become the “middle room”. This will have a fitted book case to the right and storage and desks / bureau for homework / computer on the left. The idea is to have a quiet space for the children to do their homework which is separate from their bedrooms and the living room. We can keep an eye on them and assist with homework better and their bedrooms should be used just for bedtime, ensuring that we have a more sociable family environment.

I designed the bookcase myself and hired a local handyman / carpenter to construct and install it.

Now that we knew what we wanted, it was time to throw money at an architect – be warned, the design process is very expensive. Unless you know an architect you will probably be spending around £1200 to get all the plans done. In the UK you need plans to apply for planning permission and then more detailed plans for building regulations. I shall describe this process in greater detail in the next blog post.

More like this in the Planning and Design section